According to the Content & Native Advertising IAB Spain study, 36% of Spanish internet users find online advertising intrusive. There is indeed a growing demand for relevant content related to consumers’ needs and desires. Influencer content appears to be a good way to reconnect consumers with brands, especially in Spain where influencers are omnipresent in social media: 85% of social media users follow at least one influencer according to a StarNGage study.

The decline of traditional adverting in Spain is accompanied by the emergence of the influence market, a trend that follows the growing consumer demand for credible and authentic content: according to the Content & Native Advertising IAB Spain study, for 42% of respondents the most important attributes to be a good ambassador for a brand is credibility.
Indeed, because they generate authentic and/or credible content, there is an increasing trust in influencers’ posts. That is why 71% of Spanish consumers are more likely to make a purchase based on social media reference according to the StarNGage study.

And this increase of confidence is reflected in the ROI (Return On Influence): according to the same StarNGage study, on average, businesses generate $6.50 for every $1 invested in influence marketing in Spain.

The different strata of influence in Spain

At the top, there are the macroinfluencers that have more than 100,000 followers: in Spain, the ones that have between 250,000 and 1 million followers have an engagement rate of 3.8%, and those with more than 1 million followers have one of 2.9%. These macroinfluencers, thanks to their important number of followers and thus their high reach, can help brands increase their visibility with consumers.

Finally, at the base of the pyramid, there are the nanoinfluencers that have less than a thousand of followers. They have the highest engagement rate (near 15%) because they generate authentic and relatable content, which enable brands to reconnect with their consumers and increase their brand awareness. 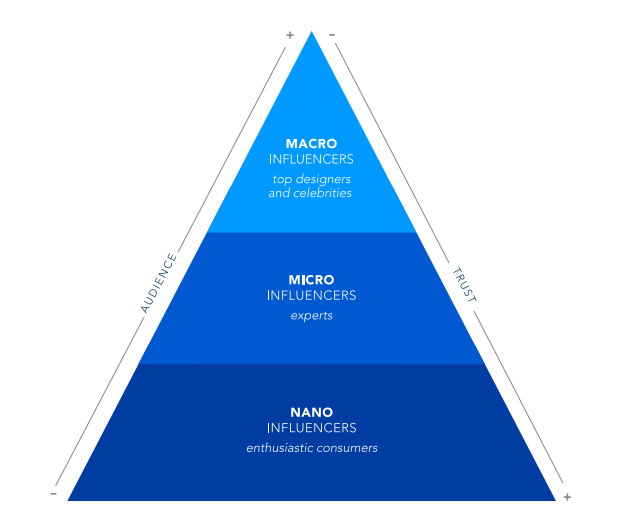 Sampleo, TWA and Vizz: the influence solution at all levels

Sampleo is present in seven different countries, including Spain with its micro-influence agency Talent Web Academy as well as Vizz, the agency that deals with Spanish talents that count millions of followers. Thus we can offer brands a complete influence solution by capitalizing in these three levels of influence in order to help them tackling the different issues they are facing: 68% of marketers think that the biggest challenge is finding the right influencers.