Over the past three years, the digital world has been marked by the emergence of a completely new phenomenon: virtual influencers. In a few years, these 3D characters have become real influencers in the networks.

In 2016 a Computer-generated Imagery (CGI), a virtual character with an ultra-realistic appearance named Lil-Miquela, appeared for the first time on Instagram. This CGI has been conceived by the Brud agency and was so successful that the start-up raised nearly $20 million to continue to develop its avatar and create new ones.

A year later, “the world’s first digital top model” named Shudu launched its account on Instagram. And it is an immediate success: in just two years, the gynoid (humanoid robot with a feminine appearance) gathers 178K followers with an engagement rate of 6.52%. The virtual model was spotted by Rihanna and became the face of her brand Fenty Beauty.

The trend for the CGI is a real opportunity for brands, allowing luxury houses in particular to modernize and thus reach a younger and more connected audience: Prada, for instance, called on the influential Lil-Miquela for its fashion show in Milan.

In addition, these virtual characters offer total control to advertisers since they are not real and therefore have no emotion. They are thus much easier to manage and cannot be subject to controversy or bad buzz. They are also more economical because they can be found in virtually any part of the world and therefore do not require any transport costs.

Some brands have even taken full control of this phenomenon by creating their own virtual influencers. This is the case of Balmain, which unveiled its “Balmain Army” in August 2018, three virtual characters including the top Shudu. However, this trio of top models was not well received by the Internet users, which forced the brand to return to more traditional models. 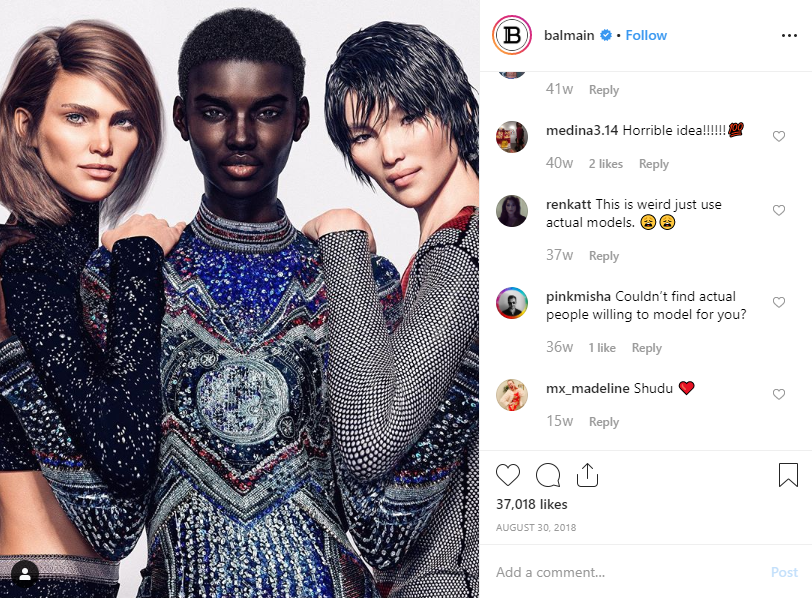 Even if these marketing tools have been really well received by many internet users, this trend can disappear just as quickly as it has happened. Indeed, according to a study conducted in 2018 by the Suzy platform, 59% of respondents perceive the substitution of real influencers by virtual models as negative.

As a matter of fact, consumers are increasingly sensitive to the authenticity of content posted on social networks, and are therefore looking for more honest and real opinions. Why trust a figure created from scratch which has never tested the product?

At Sampleo, we have understood the importance of the power of recommendation. We consider authenticity to be the key to the success of our influence marketing operations. We ensure that the creativity of our ambassadors and the honesty of their opinions are fully expressed on social networks, while guiding them to assure the perfect satisfaction of our clients.

If you are interested in influence marketing or just want to know more, contact-us.